[Synthetic] Chemicals used in some new carpets, carpet pads and the adhesives used to install them can harm your health. Some of these chemicals and glues are made with volatile organic compounds (VOCs), which emit odors and pollutants. New carpet installation also has been associated with wheezing and coughing in babies in their first year of life.- American Lung Association

Whether your carpets are new or old, they have more bad things in them than you want to imagine. The list is staggering. For new [Synthetic] carpets there are VOC’s (Volatile Organic Compounds). These include toluene, benzene, formaldehyde, ethyl benzene, styrene, acetone and a host of other chemicals, some of which are on the Environmental Protection Agency’s (EPA) list of Extremely Hazardous Substances. Known carcinogens such as P-Dichlorobenzene are in new carpets, as are chemicals that produce fetal abnormalities in test animals. These chemicals cause hallucinations, nerve damage and respiratory illness in humans. – http://www.medhelp.org

[Synthetic] Wall-to-wall carpeting is one of the unhealthiest flooring materials for many reasons. Many of the components that make up carpeting out-gas a variety of chemicals into the air for a long period of time. Off-gassing or out-gassing refers to the release of gases during the life of a material. Many of these gases are considered toxic to people as well as to the environment. Heat and sunlight can increase the off-gassing rate.- http://1earth1design.com

Other compounds in [Synthetic] carpeting that affect your health are adhesives, stain protectors, moth-proofing and flame retardants. That “new carpet smell” comes from 4-PC, associated with eye, nose and upper respiratory problems that are suffered by many new carpet owners. 4-PC is used in the latex backing of 95% of US carpets. In 2000 the 3M Company removed the chemical perflouro-octanyl salphonate from their product, Scotchgard, because it had been found to cause reproductive problems in rats. It had also been found in high levels in the wildlife of urban areas. Moth proofing chemicals contain naphthalene, which is known to produce toxic reactions, especially in newborns. Fire retardants often contain PBDE’s which are known to cause damage to thyroid, immune system and brain development functions in humans.

Older carpets can be more of a hazard than new ones: Not only do they contain the chemicals banned from more recent production, they also have had years to accumulate pounds of dust mites, dirt, pesticides and other toxins brought in on shoes, feet and pet’s paws. Did you know that your carpet can hold up to 8 times its weight in toxin filled dirt and you can’t even see the trapped dirt that your carpet is hiding! The EPA has stated that 80% of human exposure to pesticides happens indoors. Every time you spray for bugs or use a fogger, the chemicals settle in the rug and stay there for years. If you paint your room the curing paint leaves its VOC’s in the carpet for you to inhale long after the walls no longer smell of paint. You’ll be living with those toxins (sealers, solvents and glues) even after you clean with all the right products. Household dust contains lead and other heavy metals, because lead is in our soil and will be for a long time to come. Older carpets are so toxic that your chances of being exposed to hazardous chemicals are 10-50 times higher in a carpeted room than outdoors. If the carpet is plush or shag, your risk increases substantially. – https://aircleaners.com

Carpets may trap pollutants like dust mites, pet dander, cockroach allergens, particle pollution, lead, mold spores, pesticides, dirt and dust. Toxic gases in the air can adhere to small particles that settle into carpets. These pollutants may become airborne when disturbed by renovations, vacuuming or even daily activities like walking across the carpet. Children are more likely to be exposed to pollution in carpets. They spend time playing on the floor and place their hands in their mouths. If a large area is covered in carpet, it may be very difficult to remove indoor air pollutants and allergens.- American Lung Association

Environmental impacts include the amount of fossil fuel required to produce carpet, transportation of the carpet, and disposing of carpet into landfills. Over 1.8 million tons of carpet are disposed of in US landfills Each Year. 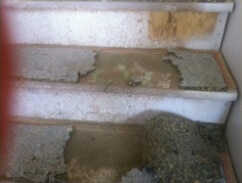 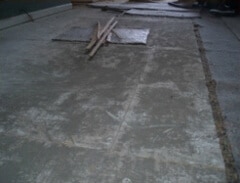 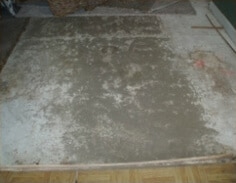